Sweet Vibes: “The World As It Could Be”

Sweet Vibes: “The World As It Could Be” 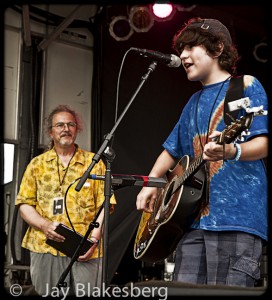 David Gans and Henry Sidle at Gathering of the Vibes, 2011 ©Jay Blakesberg

At this year’s Gathering of the Vibes, young singer/songwriter Henry Sidle, who’s been inspired by the Rex Foundation’s work, performed his original composition “The World As It Could Be” and was interviewed by GOTV performer and longtime Rex supporter David Gans. Then the two of them played “Ripple.” Does it get much sweeter? We don’t think so… Check out the audio…

Henry Sidle and David Gans at Gathering of the Vibes

Henry wrote to Rex Executive Director Sandy Sohcot: “The Vibes was fantastic. The presentation went so well. It was great that so many people got to hear about the Rex Foundation and the great things it does. It was an honor to play with David Gans; it was amazing playing for a crowd this big. I couldn’t believe I was playing at the same festival Furthur, Buddy Guy, Levon Helm, Dr. John, etc. have played at. Thank you for giving me an opportunity to do this. I couldn’t have chosen a better Bar-Mitzvah project. I can’t wait to keep on doing as much as I can for the Rex Foundation.”

Sandy says: “If the planning for Henry Sidle’s participation at the Gathering of the Vibes was fun and gratifying, then hearing about Henry and David’s experience, and seeing the photographs evokes sheer elation. How great is it to have the next generation carry on the spirit of Jerry Garcia and the Grateful Dead at GOTV by demonstrating the power of music and care for the community to generate such positive ripples!

“The Rex Foundation is deeply grateful to David Gans and all at the Gathering of the Vibes for making this special segment of the Festival possible. We also want to commend Henry for all of his outstanding work done with such care. And thanks to you for checking out Henry’s song and video and letting others know about his great work.”