TWAICB Director Sandy Sohcot says: We’re delighted to hear from colleague Pedro Mena that Siddharth A., one of the students in his UDHR-themed art program at Columbus Academy, received a Scholastic Art Award for  his UDHR-inspired art. We’re delighted to share Pedro’s letter and Siddarth’s work. We’re inspired by his depth of thought and the way he depicts his messages about discrimination! We can all learn from this.

I’m delighted to share that one of our students’ UDHR inspired artwork as been awarded a Silver Key for the Central Ohio Regional Scholastic Art Awards! His artwork will be on exhibit at the Columbus College of Art & Design’s Acock Gallery Feb 12-22. Attached is a photo of Sidd’s art piece and below his thoughts on creating it… 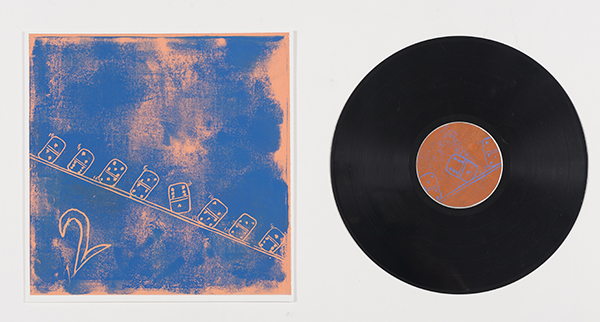 – I selected Article 2, “Freedom from Discrimination,” from the Universal Declaration of Human Rights for my print because I felt that discrimination in all forms and places is a growing problem throughout the world in the present and was also a problem in the past. Therefore, I wanted to create a piece of artwork that portrayed discrimination but in a more subtle way.

– The dominoes represent a pattern that is broken by a single domino which falls over in the opposite direction. This may be an unusual representation of discrimination but that is part of the reason I created this piece – to show that discrimination appears in many forms. This pattern is like a workplace or school in real life where one person may do the opposite of others and be discriminated against for being different.