Inspiration to Speak Up and Foster Positive Public Dialogue

Inspiration to Speak Up and Foster Positive Public Dialogue

Following recent events in Charlottesville and the subsequent responses from the president, we posted via Facebook and Twitter about how the Universe of Obligation could be an inspiration to speak up, as described in this blog post.  We also shared this link to our Resources for Speaking Up, which we hope you’ll find helpful.

The Universal Declaration of Human Rights (UDHR), as well as the Universe of Obligation concept, came about in response to the horrors of World War II and the Holocaust.  We can use them as tools for not only speaking up, but also promoting positive communications about the complexities of current issues we face. 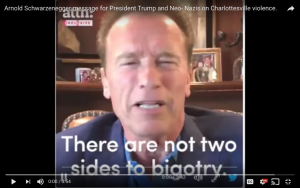 Arnold Schwarzenegger on Charlottesville, Nazis, and speaking up.

We’ve seen many meaningful responses to the Charlottesville events, and especially wanted to mention two that reflect Universe of Obligation concepts as well as the principles of the UDHR. The first, a letter published  August 14 by Alan Zimmerman, President of Congregation Beth Israel of Charlottesville; the second, a compelling video message from Arnold Schwarzenegger.

When I listen to Arnold Schwarzenegger I am reminded of UDHR Article 1 – All humans are born free and equal in dignity and rights.  They are endowed with reason and conscience and should act toward one another in a spirit of brotherhood. 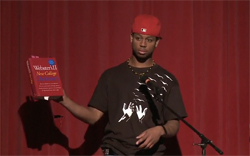 In 2009, at the Arroyo High School Town Hall on the UDHR, Terrell Patrick profoundly explained both the rights and responsibilities associated with UDHR Article 19.

In his “Webster’s” soliloquy, Terrell holds himself accountable to stop using language he has the right to express, realizing that this language degrades and dehumanizes others. Terrell’s compelling message resonated with his peers and teachers, and helped raise needed awareness about the impact of our actions, even when we technically have the right to these actions.

Let us know your thoughts on how to further public dialogue in a way that respects both vital rights of expression and rights to feel safe and experience equality, justice and dignity.  Email us at info@theworldasitcouldbe.org, join us on Facebook and Twitter.