TWAICB Director Sandy Sohcot writes: The news, domestic and international, is filled with stories of terrible injustices and tensions that threaten stable peace. Meanwhile, social media posts among people with seemingly common issues are filled with alarmingly hostile language, causing dissension instead of dialogue about collective pursuit of justice, as exemplified in this recent New York Times article about the upcoming women’s march in Washington, DC.

With all this negative “noise,” it is hard to feel hopeful that one can do something to make a positive difference, let alone offer knowledge of and pursuit of universal human rights as a vehicle for positive change. Yet, thanks to my recent experiences connected with presenting a workshop on TWAICB at the NCSS Conference in Washington, DC, as well as refusal to be discouraged, I have renewed perspective to share. 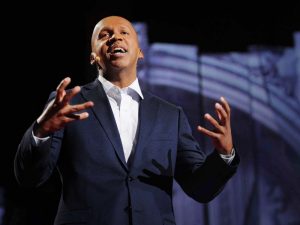 I’d like to start with what I learned from one of the keynote Conference speakers: Bryan Stevenson, Founder and Executive Director of the Equal Justice Initiative and author of Just Mercy. His messages and stories compel action toward justice even in the direst of circumstances. He outlined five vital strategies to support endeavors toward positive change:

I participated in meetings with my colleagues from HRE USA and the Human Rights Community of NCSS, where we revisited the NCSS statement published in 2014 about the importance of Human Rights Education (HRE). Here is one excerpt from this statement that reminds me of why HRE is so vital to pursuit of justice:

Universal human rights represent a positive value system, a standard to which everyone is entitled. Students can make connections between these values and their own lived experiences. This approach recognizes that the individual can make a difference and provides opportunities to explore examples of individuals who have done so.

Does this approach solve everything easily? Of course not! Even the term “human rights” causes controversy and discomfort. And, working to reconcile how to address one person’s rights when they conflict with those of another is fraught with complexity. 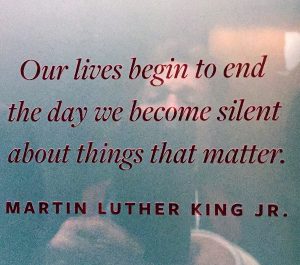 I visited the National Museum of African American History & Culture. Absorbing the history of slavery was sobering and deeply disturbing, especially since this history reverberates in today’s issues. Moving through the exhibits to see the many examples of courageous people working to eliminate slavery, combat Jim Crow laws, and fight for civil rights, I saw the following quote by Martin Luther King, Jr:

Our lives begin to end the day we become silent about things that matter.

Upon returning home, these words of Dr. King came to mind at the Arroyo High School Town Hall on the Universal Declaration of Human Rights (UDHR). The theme the students came up with is “Fight to Unite; Unite to Fight.” The idea behind this theme is that the struggles of others for equality, dignity and justice belong to everyone, and that speaking up and taking action is essential. For me, this level of engagement and care brought home the DC trip lessons, along with stronger-than-ever commitment to pursue human rights as seeds of action toward justice.