“I love that The World As It Could Be Human Rights Education Program inspires people to take action, that leads to equality, justice, and dignity for all, building a better world. It really has a huge impact!”

With the depth and breadth of positive impacts from the last fifteen years of work, the Program endeavors to widely distribute its high school curriculum that integrates the creative arts and a culminating celebratory presentation, and, consistent with the Common Core curriculum standards, promotes in-depth learning and critical thinking skills. With The World As It Could Be Is Within Reach, a rite of passage for youth in the Eden area of Alameda County, California, we endeavor to offer a model of positive initiation of youth that can be replicated in many communities. TWAICB also seeks to utilize its growing library of videos of student presentations and commentary about the UDHR to raise awareness and spur dialogue about the continuing relevance of the UDHR as part of enhancing the social emotional learning of youth, promoting positive community and civic engagement, and creating a culture of thinking and acting that fosters equality, justice and human dignity for all people.

As part of carrying out its initiatives, the Program seeks to contribute multiple levels of benefits beyond providing quality educational experiences and raising awareness about the UDHR by:

TWAICB grew out of a series of initiatives begun in 2006 at the Rex Foundation, the charitable non-profit organization founded by the Grateful Dead, a California Bay Area Rock and Roll Band that began in the late 1960’s. The Rex Foundation has provided grants to grass roots non-profits since 1984, supporting a wide range of efforts, including those for a healthy environment, the arts, education, protecting indigenous cultures, and strengthening communities.  In February 2006, the Foundation published the newsletter Perspectives on Being Human, to raise awareness about the human rights framework as a way of explaining the relationships among the issues supported by its grants.  The newsletter included the text of the UDHR.  With one of Rex’s goals being to serve as a catalyst for positive social change, and seeing the UDHR and the overall human rights framework as supportive of this goal, Sandy Sohcot, the Executive Director, decided to explore strategies to bring the newsletter to life in a way that would creatively involve youth, and provide a vehicle to connect with community leaders.

In April 2006, the director of the San Francisco Mime Troupe Youth Theater Project, a Rex grantee, was asked if their youth drama program could be involved in dramatizing the messages of the newsletter.  The response was positive, and with a suggestion to include other arts-based youth programs, meetings began.  The result was that the Rex Foundation commissioned the creation of an original production created by the high school youth participants of three arts-based non-profits, guided by a creative director, along with the leaders of each organization.  These organizations, one using drama, the other dance, and the third spoken word, use their art forms to help their youth constituents address social justice issues.

In an early planning meeting, one of the youth leaders, upon reading the UDHR in the Newsletter, stated, “I never heard of this document, yet it basically spells out the world as it could be!”  This led to the title of the production: The World As It Could Be – A Declaration of Human Rights.

On December 7, 2006, the production was performed for non-profit and community leaders.  On December 8th, the performance took place at Balboa High School in San Francisco, with a full auditorium of 1,200 students plus faculty and administrators.  The following experiences and observations led to development of The World As It Could Be curricula:

The resounding positive response among all participants led to the development of the TWAICB curriculum, further compelled by: 1) The excitement of the educators involved in the process to bring attention to the UDHR, as well as to have innovative ways to teach material that is otherwise considered dry; 2) The fact that funding for the arts in public schools was being cut or eliminated, and wanting to demonstrate the vital role the arts can play in effectively teaching academic subjects; 3) Knowing that youth benefit from having an opportunity to present what they learn to their community of peers and adults, and then be celebrated for their accomplishments.

A team of educators, including those involved in the production itself, as well as Andrea McEvoy Spero, a Ph.D. student at the University of San Francisco’s School of Education’s newly initiated Human Rights Education degree program, came together to develop curriculum specifically to teach about the UDHR. The curriculum included creative arts as part of each lesson plan, and a culminating, rite-of-passage component, geared to high school social studies and language arts classes that could include the UDHR as content.  Two Bay Area high schools agreed to help pilot the curriculum.  In 2010, after the successes of the two-year pilot, the curriculum was published. The first 3-day Institute, organized in collaboration with the University of San Francisco School of Education, provided training to educators and non-profit leaders on implementing the curriculum.

In January 2014, TWAICB became a program of the Alameda County Deputy Sheriff’s Activities League (DSAL), continuing to be directed by Sandy Sohcot.  This move took place to act on the opportunity to create an after school Rite of Passage program for the youth of the REACH Ashland Youth Center, as well as to provide a pathway to bring attention to the human rights framework among the public safety officials of the Alameda County Sheriff’s Department. The World As It Could Be Is Within Reach Rite of Passage program was introduced in 2014.

TWAICB maintains close relationships with the Bay Area high schools involved in the curriculum pilot, and has presented annual 3-day Institutes on the curriculum through 2019.  The World As It Could Be Is Within Reach Rite of Passage program curriculum has been implemented since the initiation of its first class in the 2014/15 school year, taken on by Arroyo High School in 2017. 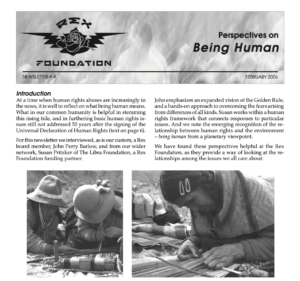 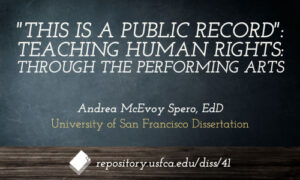 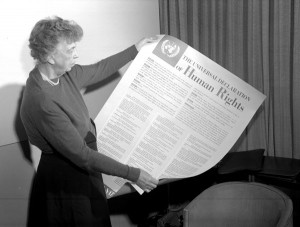 Prepared by Sandy Sohcot, Director of The World As It Could Be Human Rights Education Program © with content credit to Andrea McEvoy Spero as of September 2020.